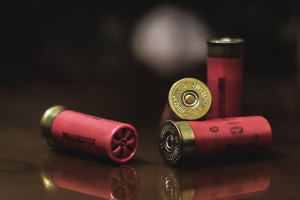 Schools should only need pens, papers and books, not bullets. Courtesy: David Leveque

Arrogance…a word which describes our collective lack of spine and paralysis on certain issues we should all agree about.  How low have we fallen to come to a point where our kids are shooting targets in their school while the NRA takes unreasonable positions on ANY infringement on the right to bear arms?  The little dirty secret is they are dead wrong on policy and the constitution.

Although the Supreme Court did settle the issue years ago regarding US persons allowed the right to bear arms, it was NOT absolute.  Other Supreme Court decisions made it perfectly clear that reasonable limitations may be placed on the people’s gun rights.  Have you seen a howitzer lately on Lexington and 51st street?

The right to live supersedes the right to bear arms.  One particular party seems to forget that point, and instead, is beholden to the NRA who has recently become an extreme organization.

Here are the easy things to do next week.  Not talk about it next week, but pass legislation next week:

Finally, here is the answer that will definitely work, in my opinion.  Sometimes the answer is right in front of us.  All it requires is a little bit of courage and commitment to do it, until the adults in the room start protecting our kids in school.

I am calling for a complete boycott of all public and private schools where kids up to 12th grade attend.

Starting on the nationwide march instituted by brave kids later next month, no one goes back to school until Congress passes these laws and the President signs it.

Think of the argument someone would have to make to fight this idea.  Imagine if a child was to tell their parents that they are afraid to go to school.  Therefore, they won’t.  Well, the parents have two choices. They can be very responsible and listen to their kid’s fears and respect them, or not listen to them and punish them or force them to go to school.  I believe even the most strident second amendment supporters who believe the NRA is guiding them in the right direction would have to then give in.  Our kids might not be able to vote, but they might be in the most unique position to effect change by our politicians.

For many Republicans, especially those fearing being primaried by unreasonable second amendment absolutist bought and sold by the NRA, they would now have cover. Think of the opposition argument for a moment in crass political terms.  One politician saying our kids need to feel safe at school instead of avoiding their education, and the other saying that the second amendment is basically absolute and not willing to have discussion on what 90% of all Americans believe are reasonable restrictions.

For too long, we have left the extremes on the left and the right dictating the policies of the majority middle.  The way our politics works, it is hard to find compromise or crack the entrenched lobbyist.  Action is the only thing that can effect real change.  I support the kids march in a few weeks, but that might not be enough.  What I would like to see them saying at the march that starting the next day, all the children in the country have the right to live safely in the United States, and the government’s number one job, over the defense of absolute gun rights, is the right to life.

Our kids can be the country’s savior.  Make us proud please.